You Don't Vote, you DON'T COUNT! 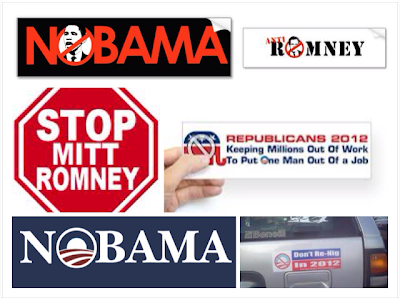 In my experience the biggest reason people (those who admit they won't/don't vote) don't vote, is because they feel like their vote does not count.  Especially after the 2000 Presidential Election, my generation has lost their trust in the political system.  I can definitely understand where they are coming from.  However, I believe the fact that most voters do not know how the Presidential election really works, is likely the biggest reason why they believe their vote does not count.  That's okay.  I am more than happy to provide a quick lesson on "how your vote counts" / "how the Presidential Elections works"/ "How votes are calculated" in a Presidential race.

First off, the Presidential race is not like your High School Homecoming race.  In other words, this is not a popularity vote, the person with the most individual "tally marks"/names on a ballot do not necessarily win the race.  The Presidential Race is a STATE ELECTION.  This means you are voting on behalf of your state.  You are voting to declare where you want your state to delegate its electoral college votes. 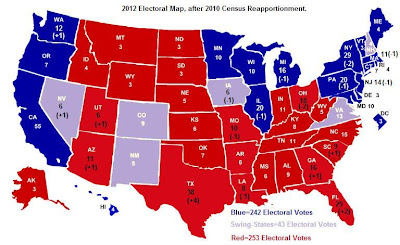 Each state has a certain number of Electoral College votes, which are based on the number of delegates your state has in Congress (number of delegates in the House of Representatives + number of Senators = number of members in Congress for each state).  A state gets a certain amount of members in the House of Representaives based on the population of that state.  The more people in a state = the more members in the House of Representatives.  Each state gets 2 Senators, regardless of that state's population.  Therefore, states with large populations have more electoral college votes than states with a smaller population (hence California & Florida being key states for Presidential Candidates).  The map above shows how many electoral college votes each state has. (disregard the colors on the map for now)
So, basically your Presidential Vote is a vote on behalf of all the citizens in your state.  You are in essence battling your neighbor to determine which candidate you think best addresses the needs/desires of the citizens in your state.  The popular candidate vote in your state, likely* gets more of  the electoral college votes designated for your state.  The Presidential Candidate with the majority electoral college votes from all states, wins the Presidency.
Think about it.  You're driving in traffic and you see a disgusting bumper sticker bashing the candidate that you think is best to run this country.  If they bought a bumper sticker, you can bet your bottom dollar they are going to exercise their right to vote.  When the polls open that driver is first in line to vote against you and your candidate.  Imagine there is many more people who share the same views as the driver with the disgusting bumper sticker and they all go out to vote.  On the other hand, you and several others like you, disagree with the opposing candidate, but you don't go out to cast your vote for the candidate you believe is best fit to represent your state.  Your thoughts, your opinions, your disagreements, DON'T count against the group of individuals who take the time to bash your candidate by purchasing a bumper sticker, because you did not Vote!
Don't go unheard, go vote, be COUNTED!
COMMENTS!
* There are a few happenstances that can occur that may cause some electoral college votes not to go to the candidate with the popular vote.  The law in each state determines if the members of the electoral college have to vote the same way as the popular majority of citizens in their home state.  However, the above description is how the electoral college generally works.  You are encouraged to do your own research on the Electoral College and how votes are weighed and counted.