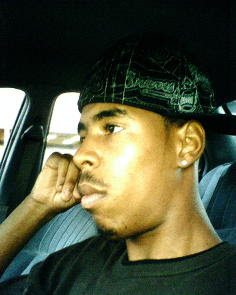 Ambitious second feature belongs to 1/3 of the group Rockstars, Devin Carter, Sr. The Rockstars have a very LARGE fan base inside and outside of their home town of Toledo Ohio. I DEFINITELY BELIEVE that God does NOT make mistakes. Devin is a close friend of mine, and a very talented artist. I have had the pleasure of witnessing the hustle of the Rockstars first hand, and believe great things are in store for them. The members of this group use their status to not only make music, but also do great things in their communities, especially with young children. It is refreshing to see good talent as well as advents of community service. Below is some EXCLUSIVE, NEVER BEFORE SEEN, RAW FOOTAGE of the Rockstars. This was taken from a recording used for an "on the spot" audition for a Record Release Party. I know their fans will enjoy.

Here is a small piece of the story of the Rockstars and Rockstar D.

What makes you Ambitious?

"I think that's starts all the way back from my childhood and the way I grew up. The typical 'ole poverty stricken black American success story. I was the child of a single mother with two younger siblings. My mother was in an abusive relationship and I had to quickly become the man of the house. So its in my blood to be ambitious, especially now that I have a son (4 years old). I feel like I'm not doing this for myself but for him. I am a simple person. If I want it, I get it...NO MATTER WHAT! My motivation will drive me alone.

What made you decide to rap/form a group?

"That started with my childhood as well. Some people don't know I started rapping when I was 10yrs old (1997). My mom moved me and my siblings to Jacksonville, Florida when i was 10.. I didn't want to go from the beginning, I had to leave all my friends and family. I didn't know anybody in Florida, so it was totally new to me. But long story short, we were homeless in I'd say about 6months after we moved. Just alot of Unfortunate things happened and we're 1000 miles from home, and being young, a kid nobody wanted to really hear how I felt or at least I didn't think they did. So I started rapping to originally express how I felt, and what was going on around me. Plus my Uncle (my moms brother) had a group at the time back in Toledo Ohio..(my home town) and to me they were the BEST thing I had ever heard..lol I don't know if it was because he was my actual uncle and could rap or if it was really good music and they had so much respect around town. We eventually ended up moving back to Toledo like Fall of 98, and I met Ekaine (one of the members in my current group the Rockstars) we started a group called "Verbal Assualt" with me, my younger brother, my cousin Rick P. and E Kaine. We did lil shows and everything basically tagging along with my Uncle and his group and soon enough we were these young kids rapping about REAL LIFE shit and it sounded good. There came the respect, but unfortunate things happened to that group. My cuzzin getting locked up, my brother losing interest, and we met Chief (3rd member of the group RockStar) down the line and it just clicked. Before u knew it we had an whole album in like a month, no writing just all feelings, emotions, and doing what we wanted to do. All of our personal characters are a reflection of our music."

What is your next goal? What does the future have in store for you?

"Well Music is my 1st Love! But over the recent year or so I've actually been losing the motivation and commitment to it. Maybe because my Personal Life has No Real problems anymore. Music was always my savior always something I could look to when Times got hard, it was my own personal Drug.. I was addicted.. And Now Its like I still Love to Get High!,.. But I'm not Addict anymore.. My Group Dropped an Album Regionally (Midwest) it did Very well.. and has been arguably considered one of the BEST Albums Ever released.. Me... D.Hustle aka RockStar D.. Chiefalone or (Chief for short).. and E-Kaine.. But I've actually been on the other side of music, trying to get my own Record Label Off the Ground. (Lotta Money Records)Me and Ekaine formed this label about a year ago with him as the front artist on more of an Solo thing. I've been handling MOST of the Business side of it, and I have to say its Going REAL well. On the Music part as far as myself, RockStar 3 is currently in the works (yea we skipped 2..lol long story). I Just recently finished an Album/mixtape with Chief of my group called "Rude and Rich", that will be released this Winter. That's about it, just trying to make it. I've been doing this for 12 years and I'm not stopping EVER!.. This is What I Do.. Its My Life.." -RockStar D

Bet you didn't notice they performed with remotes and not mics ; )

BECOME A FOLLOWER OF MY BLOG TO BE NOTIFIED OF NEW POSTS.