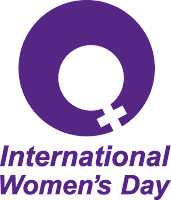 March 8th is International Women's Day!  It was originally called "International Working Women's Day".  According to internationalwomensday.com the day is meant to celebrate the social, economic, cultural, and political achievements of women.  This year the pledge is to increase "gender parity".  What that means is, we still need to demand equality in terms of status and pay when it comes to gender differences.

In honor of this day we can all make a pledge to do our part to accelerate gender parity.  A simple pledge says, when I recognize gender inequality I will speak up against it.  Even when its not apparent, if I know of an ongoing display of gender inequality I will take action for it to be addressed.  I will write to my representatives or email the CEO of a business.  I will even start a #hashtag on social media to bring awareness to surrounding gender inequalities.  Simple as that.

And because International Women's Day is meant to celebrate women's achievements lets also take the time to do so.  Another simple letter or shoutout on social media can do the trick.  Sometimes its the smallest gestures that mean the most.  Let a woman know you are thinking of them and you acknowledge their accomplishments.  It could be just the boost they need to keep their work efforts going.

What woman inspires or inspired you?  How did they do so?  Have a suggestion on how to accelerate gender parity?  Share you story and suggestions below in a comment.  If you have a woman that has inspired you, let them know on this site and then send them the link.  What you say and share will be a permanent reminder that they can always come back and read, whenever they need a little pick me up!