"Black lives don't matter to black people with guns."  This is what Judge Edward McLaughlin told 24 year old Tareek Arnold, right before he sentenced him to prison for 24 to 26 years, for attempted murder.
Black lives don't matter to black people, so why should they matter to anyone else?  This has been the argument since the inception of the "Black Lives Matter" movement.  Critics of the movement have also gone so far as to ask, "Don't all lives matter?"  If you visit blacklivesmatter.com you will learn that "Black Lives Matter" is an affirmation.  They are affirming what we all should know to be true, that black people are human and contribute to society.

Now, correct me if I'm wrong, but by affirming one thing, you are not abandoning all other similar things to that of which you just affirmed.

But what about the rotten apple?  Shouldn't something be said or done to prevent others from biting into a rotten apple?  What if red apples have a tendency to almost, always be rotten? 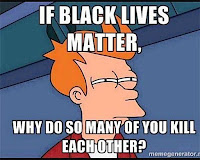 Well, you would think that red apples are almost, always rotten, if all you ever see is red rotten apples.  If you've never seen a green rotten apple or a perfectly good red apple, then I would understand your hesitation to eat a red apple.

Our experiences shape our opinions.  And a lot of our experiences, in this day and age, come from the media.  Our phones are attached to our hands and information is available at the push of a button.  When something becomes national news, everyone has an opinion about it.  Some stories we hear over and over, and some perspectives are more dominant than others.

That's why its so important to think critically and rationally about the information we receive on a daily basis.  We must attempt to take off our blinders and really think before we speak.  Do the facts add up?  Because this station reported on the story, does it make their assumptions true?  Will repeating what I just heard on the news offend others that I interact with?  Am I really getting the entire story from this news story?

To end on a brighter note, I want to show you some perfectly good red apples.  Check this video out.


THANK YOU, GENTLEMEN: A group of men showed up to cheer on and motivate students returning from Spring Break. LIKE AND SHARE if you think we need more positive role models like this in Memphis.WHY THEY DO IT: http://bit.ly/1RLsHIs
Posted by FOX13 Memphis on Wednesday, March 30, 2016

A group of black men, in Memphis, TN, recently put on their Sunday's best and spent their morning welcoming students back from Spring Break. In addition to visiting more schools, sending a deserving young man to prom in style, and preparing a "Juneteenth" celebration, the Men of Big Homies Inc., seek to promote self pride in the community. Their hope is to raise morale in the city and present the positive images you are missing in your everyday news.

Speaking with, Antwuan Williams, who founded BIG HOMIES, Inc. along with Tim Jones, made an interesting point. You never hear the term "white on white crime". Because we don't hear the term, does that mean it's not happening everyday? Because blacks do commit crimes against other blacks, should all blacks be silent about their deaths?