I was surprised that everyone was so surprised at this answer.  Chick-fil-A is closed on Sunday to allow their employees to spend time with their families.  They are definitely known for their religious values.  My guess is the shock factor came because society expects its big businesses to change their views when the views of society seem to change. Same sex relationships are definitely more common today than they were when Chick-fil-A was founded.

In response, this Friday, the LBGT community plans to host a "National Same Sex Kiss Day at Chick-fil-A." 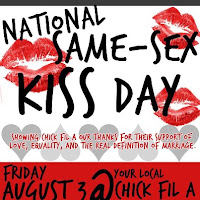 Chick-fil-A isn't the only entity receiving backlash for its take on Gay Marriage.  A group of black pastors have launched an "anti-Obama" campaign because President Obama has made statements in support of Same-Sex Marriage.  President Obama has publicly stated that he believes that "Same-Sex" couples should be able to get married.  However, he has distanced this statement from any hopes of a policy change for same sex marriages.

The Group of black pastors believe that President Obama has taken the "black vote" for granted.  The launch of this campaign is an effort to "take back our families";  family in the traditional sense, marriage between a man and a woman.    This strategy for taking back the "black vote" from the Obama Campaign suggest that the majority of the black community does not support Same sex marriages.  Is this a safe assumption?

There was a recent poll that suggested that "black women" are more religious than any other group.  At this day and age can we still equate religious background with major political views, like gay marriage?  With the record breaking numbers for Chick-fil-A, it seems that religious values are taking their stance.  It remains to be seen how successful the "Anti-Obama" campaign will go over with the black community.  Their first fundraiser is scheduled to for August 16, 2012 in Memphis, TN.

What do you think?  Was Chick-fil-A appreciation day too much or just right?  Has President Obama taken the black vote for granted by supporting Same Sex Marriage?  If President Obama caught you at Chick-fil-A should he expect NOT to get your vote? Comments
Posted by TalkstillCheap.com at 1:16 AM No comments: 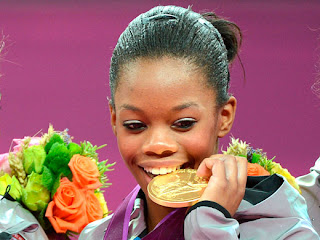 However, unfortunately the "lack luster" media coverage of Gabby throughout the Olympics and the odd nickname of "Flying Squirrel", both have taken a back seat to social media comments on Gabby's hair.  Today I was even likened to a "crab in a barrel" because I tweeted "Gabby's hair hurts my feelings they would send her out like that".  It was shortly after that, I realized how sensitive a lot of people on my TL were being about Gabby's hair.  Throughout the gymnastics coverage I noticed others speak on her hair, some going so far as to calling her hair "nappy".

I personally don't see her hair as being nappy.  To me if someone's hair is nappy it is obvious they took no steps towards its maintenance (comb/brush), but I'm sure everyone has their own definition of "nappy".  As a blogger who tries to ignite conversation via my blog posts, I feel everyone is definitely entitled to their own opinion.  However, I do believe there is a time, place, and a tactful way to discuss things (hence this forum).  As a black woman, a former athlete, and a woman with natural hair, I did not like Gabby's hair.  My disdain comes from the belief that there definitely could have been better ways to manage her hair.  My wish is for her to be presented as beautifully as her teammates and the rest of the athletes.  I'm sure her hair was the last thing on her mind.(or maybe it wasn't)  However, throughout the Olympics commentators stress how big of a WORLD STAGE the Olympics is, and this is true.  Gabby made history tonight.  Little girls throughout the world now have a new role model.  Not saying vanity over talent, but why can't we present Gabby as perfectly as we present the others.  I don't think her hair is nappy but I think it could have had more attention just like the media could've given her accomplishments more attention.  Basically, I think overlooking her hair the way that it was, was a slight ploy to "dumb her down", I felt it was worth mentioning and I won't apologize for that.  Either way I'm glad her smile and her talents ROSE to the Occasion and she is bringing home the GOLD!

However, I know Gabby is "NOT HER HAIR", just like the rest of the world.  My disdain for her hair does not make me think anything less of her character and her talents as a Gymnast.  I think it becomes an issue if negative is all you ever speak on, for instance if anything I ever said about Gabby was in reference to her hair.  As stated earlier, (and always on this blog) its GREAT to have an opinion.  Even better if you think before you speak and have some relative reasoning behind your opinions.  Sometimes the obvious should be discussed, even if it steps on some toes.  Nothing wrong with a healthy debate.  Everyone is entitled to their own opinion, and everyone has one.  You may find your opinion on the "wrong" side, but OWN IT! With that being said, let's dialogue.  Leave your comments here.  Should Gabby's hair be totally off limits?  Does speaking about her hair totally distract from her achievements?  With achievements so BIG and so POSITIVE should we never mention any of the negative?

TalkStillCheap.com Salutes you Gabby Douglas, you have a beautiful spirit that I'm sure won't be overshadowed by controversy!

Posted by TalkstillCheap.com at 10:57 PM 2 comments: