NOMINATED FOR S.E.A. need your VOTE!

THANK YOU ALL SO MUCH!!!!  I asked for my readers/supporters votes for SEA awards and the Black Web Blog awards.  When I didn't make the Blackweblog awards, I completely forgot to continue the campaign for SEA award nominations.

However, as of September 5, 2010 TalkstillCheap.com made the SEA award ballot for "Website of the Year" and I made the ballot for "Role Model of the Year"!! It is such a great honor to join the nomination likes of Worldstarhiphop.com for the website nomination and Tony Gaskins in the role model category.

These people are well known and Im just "lil ole" me trying to make some positive influence in the world.  So I definitely need your votes.  Go to the website vote ballot HERE, select TalksillCheap.com for "Web Site of the Year" and Shirrelle M. for "Role Model of the Year".  You must provide a valid email address and you must go to that address after your vote to confirm IN ORDER FOR YOUR VOTE TO COUNT!

The SEA (Southern Entertainment Awards) is an organization that recognizes Southern Entertainers, specifically targeting Djs and Indie artists.  Last years awards were held in Memphis, TN.  Over 80 awards were given out, and the weekend consisted of conferences, performances, and of course the award show.  The neat thing about the recognition is nominations and votes are taken from the general public, so even people like me could make the cut.  Check out their website and rock the vote.

Thank you, and a special thank you to those of you who nominated me during nominations to make this moment possible.  I appreciate you and lets keep the positivity going!
Posted by TalkstillCheap.com at 12:00 AM No comments: 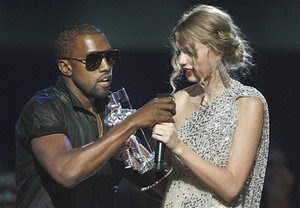 This year's MTV VMAs are quickly approaching.  Media sources are buzzing about last year's fiasco and the return of Kanye West at this year's 2010 Video Music Awards (VMAs).  Kanye himself has been expressing his feelings about who WON and who LOST, on account of his actions last year.  He has apologized and hopes to win back some fans he may have lost.
"She deserves the apology more than anyone," Kanye West stated via his twitter.
I assume he has apologized as sincerely as he can, under the circumstances.  One year later the incident has not been forgotten.  But has Kanye been forgiven, by Taylor, by fans, by media?  Can he truly be forgiven if we never forget?
Some say forgive but never forget.  Is it possible to do both?
In my opinion it would be a whole lot healthier to attempt to forgive someone for a mistake and also forget about it, rather than to not forgive and hold on to a person's mistake.  They say it only hurts the one who holds onto it.
What do you think?  She would motivate each other to forgive and forget? Forgive and never forget? Never forgive and never forget?
COMMENTS!!!
Posted by TalkstillCheap.com at 4:21 PM No comments: