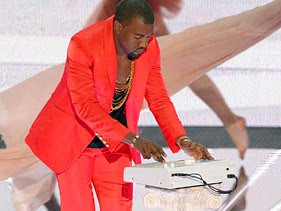 Kanye West performing in Red Suit 2010 MTV VMAs
If you are a Kanye West fan and can't wait for the single to be released, don't worry I have you covered.

Kanye has been releasing G.O.O.D. music on twitter every Friday. Fans are now waiting the release of this song performed at the close of this year's 2010 MTV VMA show.

His performance was without a doubt, the most anticipated performance this year. The buzz was all around Taylor Swift and Kanye West interaction.
Taylor introduced her new song "Innocent", with a replay of last year's event, Kanye shockingly interrupting her VMA speech. Supposedly she wrote the song she performed tonight for Kanye.

Some are saying Kanye also wrote the song he performed tonight for Taylor Swift. He did mention writing a song for Taylor, but he has not confirmed if this was the song he was referring to.

The lyrics to the chorus are as follows:

In listening to the entire song, I take the song to relay the message that Kanye is who he is, you know it and he knows it. And if you don't like it or accept it, runaway. He won't change, and he's making a toast to celebrate accepting himself, along with the others who accept him for who he is as well.

My twitter followers, including myself, liked the track. What do you think he is saying. You may interpret it differently from me. TalkstillCheap.com encourages you to think for yourself, and to examine why you like or do not like certain things, as opposed to just following the "in-crowd". If you are #teamtaylor you may not have liked the song at all or the message behind it. Share your thoughts here!