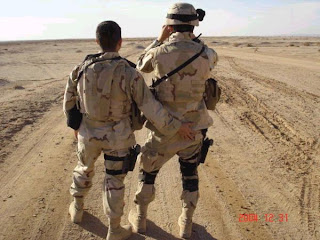 The Military may NEVER BE THE SAME!
“This is one of the Senate’s most critical votes of the year – and potentially life-altering for our military,” says, Dr. Richard Land, president of the Southern Baptist Convention’s Ethics & Religious Liberty Commission.
To﻿morrow, Tuesday September 21, 2010, the Senate is scheduled to vote on legislation that could possibly rid the infamous "Don't ask don't tell" policy.  The policy refers to an action against homosexuality put in place by former President Clinton in 1993.  It states, that as a member, you can not be "openly gay" and service our country, and on the other hand the military will not openly ask you about your sexual orientation if you plan to serve.
Since the passing of this legislation in 1993, on average 600 soldiers have been discharged based on the disclouse of their sexuality AND the number of convicted felons allowed to enter the military has doubled each year.***  What do you think about that?  Is the compromise worth the exchange (homosexual soliders for convicted felon soldiers)?  Is the "dont ask, dont tell" policy an compromise at all, if so, who benefits homosexuals or heterosexuals?

Supporters of the reversal of the "dont ask dont tell policy" say that it will increase the number of skilled and quailifed military personnel by removing sexual discrimination in the military.  One former sargent of the military (who came out of the closet during his service) wonders, "how can I trust a solider to save my life in battle, if I can't trust them to disclouse facts of their life?"  Supporters of the ban on "dont ask, dont tell", believe the policy, in actuality, demands homosexuals lie about their sexual preference.

Those who want the "dont ask dont tell policy" to remain believe it is necessary in order to maintain good order and discipline.  They believe the disclosure of sexuality, in fact, does not matter when it comes to service in the military.

The Pentagon is currently conducting a study on the impact of openly gay military servicing our country.  President Obama is in support of the repeal (overturn of the law) and more citizens support this decision than those who supported President Obama's decisions on Health Reform.

What do you think?  Have we reached the time where it should be safe to lift the "dont ask dont tell" policy?  Are Americans, specifically those in the military, more comfortable with homosexuality than they were in 1993?  We will find out tomorrow!!
***update*** Today, September 21, 2010, with majority vote of 56, the Senate failed to lift the "Don't ask, don't tell" policy. 60 votes were needed to ban the policy, and it fell just that short. How do you feel?