No one is Exempt!! 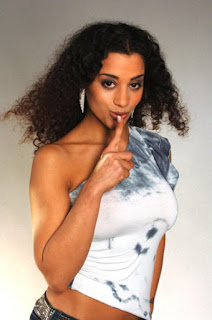 How appealing is this lady to you?

She is an International POP STAR!!

Well believe it! The lady pictured above has done just that.  She is currently on trial for knowingly spreading the disease.  She admits that she "Made a mistake" having sex with at least three men without protection (one of which has been confirmed to now be HIV positive).

She genuinely sounds sorry!  Unfortunately her excuse for not exposing her status was the fear of breaking up her Pop group!

What kept her from using a condom?

Currently, a well known sexually rampant woman has stated she had unprotected sex several times with a well known rapper!!

What's the problem?? If a pop princess won't reveal her HIV status to her partners do you think a woman hungry for celebrity status will or any regular joe/jane with nothing to loose will??

It's up to you & only you to protect yourself by using a condom & knowing your & your partner's status.

COMMENTS!!
Posted by TalkstillCheap.com at 12:29 PM