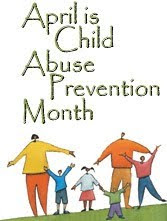 In 1974 the first Federal child protection legislation, the Child Abuse Prevention and Treatment Act (CAPTA), was passed.  The Act has been tweeked and altered several times, but still remains relevant and active today.

Here is a brief history on the use of the color "blue" in child abuse prevention.


In 1989, the Blue Ribbon Campaign to Prevent Child Abuse had its early beginnings as a Virginia grandmother's tribute to her grandson who died as a result of abuse. She tied a blue ribbon to the antenna of her car as a way to remember him and to alert her community to the tragedy of child abuse. The Blue Ribbon Campaign has since expanded across the country, and many wear blue ribbons each April in memory of those who have died as a result of child abuse.


I know I frequently discuss mentoring our young adults and teenagers, but is also important to speak up and protect our younger generation that can not yet fend for themselves.

I know this is real.  My own family member was a victim of child abuse and suffered the lost of his little girl.

In honor of her memory, my aunt  will be holding a BLUE & WHITE BALLOON RELEASE CEREMONY IN MEMPHIS on Saturday, April 17.  The event will be from 12:00pm until 1:00pm at the George Washington Carver High School located at 1591 Pennsylvania St. Memphis, TN.

The Carver High School Alumni Class of '82 will release balloons, white to symbolize the children who have lost their lives due to abuse and neglect and the blue balloons will serve as a tribute to those who silently suffer.
Posted by TalkstillCheap.com at 7:55 PM