1st of the Month: SACRAFICE 40 days 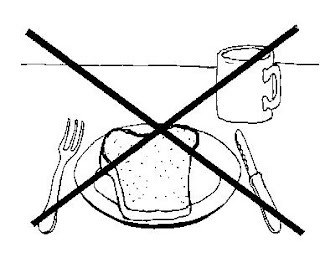 The season of Lent this year began February 17th and will end on April 3rd, the day before EASTER SUNDAY (for Roman Catholics Lent ends on sundown April 1st).
Christians recognize the season of Lent, 40 days (excluding the Sundays during the season), as a symbolic reference to a story of Jesus Christ when he retreated to the wilderness for forty days without water, food, or any other luxury you may think of.
In most cases Christians practice an exercise of  "FASTING".  Fasting is a personal act of devotion to God.  It is significant in meaning by the self-less act of showing you are a "friend" of Jesus.  You are reminiscent in experiencing the sufferings he endured in thirst, hunger, and pain, while he was in the wilderness.
During this practice most believers eliminate a thing or two from their normal diet or routine.  For instance, one thing I gave up was McDonalds.  I love those nuggets and stoping there can be soooo convienent.  I know some peers who have given up chocolate, alcohol, all fast foods, meat, sweets, and some have even given up cursing, swearing, and lying, just to name a few.
I made the comment on twitter the other week, when my friend stopped at McDonald's, "Nuggets, smell so good right now.  I can't wait until I can have some, but then again I've gone this long, why not go another 40days".  (my Forrest Gump voice)
When I said that, I kinda felt a little uneasy.  How good is my fast if I revert to the same thing immediately after the season is over?  I had to then reflect on the reason for the season.
Whenever you feel the urge to have or do the things you have given up for the season of Lent, it is productive to reflect on the reasoning behind your sacrifice and also say a prayer in remembrance of the season.  Also, when we sacrifice, we are usually doing it in expectation of its benefits, what we or someone else will gain upon completion.
When was the last time you sacrificed something for someone else, be it time, money, favor, new/used goods, etc.?  How often do we sacrifice for others?  That is a deep question, and often time we have to sit and think about it TOO LONG!
Lets work on that this month.  Do something good for someone else this month.  Practice good favors with the end in mind.  How can you put a smile on an elder's face, a teen's face, a child's face.......and of course ULTIMATELY YOUR FACE?!? For when we do good, we are rewarded with goodness and what we give we receive double fold, and that's all the more reason to SMILE!!
So, if you participated in the season of Lent this year, don't just be GLAD when April 3 has come and gone, and revert to your old ways.  Let not your fasting be in vain, but continue in the spirit of SACRIFICE!!
LET ME KNOW HOW IT GOES....LEAVE YOUR COMMENTS HERE.  Share your stories of this Lent season.  What did you sacrifice from your daily routine?
Posted by TalkstillCheap.com at 12:00 AM