TURN it UP Tuesdays: STRANGE 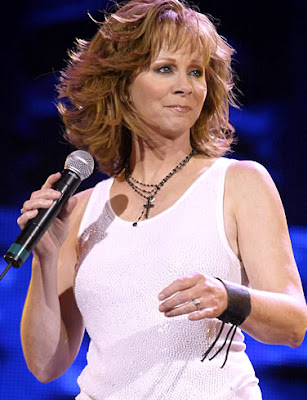 New Year! New Things! Although, this week's featured Artist is nothing new. My Girl Reba McEntire. I have had her latest album "Keep on Loving You" since last year!! (lol I had to do it, I have been enjoying this cd since last November 09) I have always been a fan on Reba's sound and also of her hit television show, also entitled Reba. She has been making music in the country genre for years now.

She keeps banging out the hits. I admit this is my first album of her's, but I absolutely LOVE IT! I was watching tv one day and happened to pass by one of her new videos for a song entitled "Consider Me Gone". I was amazed, I thought wow Reba has a new song out, and she looks good. ( I actually tweeted this thought). Buy the cd is exactly what I did. I popped it in the cd player of the car and this feature song is the first song on the cd. I was jammin and so was Reba. I like country music and the stories they tell. Also, unlike some other genres their videos actually match the plots of their songs.

This particular record talks about they "Strange" way that love sometimes work. Instead of feeling down and beating yourself up over a breakup, you can look on the bright sides of things. So this one goes out to you who may have had a terrible New Year's Eve/Day. Maybe, your "BOO" for the holidays is gone because the gift season is over, maybe you made a resolution to drop your looser mate and move on to better, but you are having a hard time letting go. LISTEN TO THIS TRACK & KEEP IT MOVING!

I am a lover of ALL KINDS OF MUSIC. If you are a music lover, Im sure you will also enjoy this one. We are OPENING UP and ENJOYING OURSELVES WITHOUT LIMITATIONS FOR 2010 BABY!! Lets do it!!