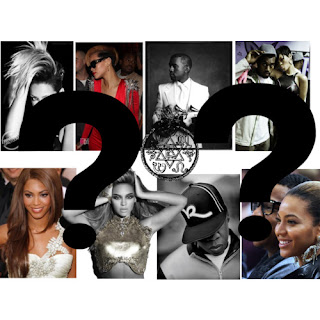 So lately there has been a lot of talk about Popular artists being devil worshipers. Most commonly, Jay-z, Beyonce and Rhianna. Some people have taken these artists lyrics and appearance and given them their own interpretation. Unsurprisingly, this belief has a lot of following. Even some of these artists own fans not support these allegations, and no longer listen to their music. The debate seems to get stronger and stronger with each newly released single and/or video. You can find several of these videos on Youtube. Check out the following video, its just one that I found that was not extremely long and addresses more than one of the views and displays some "evidence" people have found to suggest some artists are a a part of a secular cult.

How does this make you feel? Do you believe it? Disturbing at all?

Some speculate over the "roc nation" symbol always being placed over the left eye (I never noticed that before), J'HOV, Jay-Z referring to himself as God (Jehovah), and recent lyrics "Jesus cant save you, life starts where the church ends.."

Jay says he is just an entertainer and the rumours are ridiculous.

I recall doing an interview in college, and creating an autobiography for a lady who is an advocate of Gay, Lesbian, Bisexual, and transgender rights. She recalled a quote that her religion professor gave her in college, and it sticks with me to this day.

I think this quote also hits close to how Jay-Z is attempting to describe his beliefs. Religion is more of an organized belief, where as you may believe you have to follow a certain routine (i.e. attend church 3xs weekly, pay tithes, visit sick and shut in, make the ultimate journey to the top of a mountain, routine meditations, fast at certain times of the year) in order to be a "true" believer or demonstrator of faith. Whereas spirituality is more of a personal connection, where one defines and creates their own relationship with a spiritual entity. Having been through hell and back, you may have a stronger sense of where your spiritual guidance comes from.

Therefore, you can go through the motions, attend church every week, say a prayer or two, or even pay your tithes, but if your spirit isn't in it, if you do not truly believe in a divine entity and express that believe through your living....then what is the purpose.

I say that, to say this, you can watch all these youtube videos on Jay-Z and other artists, and either continue or stop listening to their music, BUT their music/actions won't have anything to do with your religious or spiritual journey. Only you can decide how much you allow someone else's views and opinions to dictate your own.

So, where do you stand?

Follow this blog for more postings at www.twitter.com/TalkstillCheap
So, what are you going to do?
Posted by TalkstillCheap.com at 12:49 PM