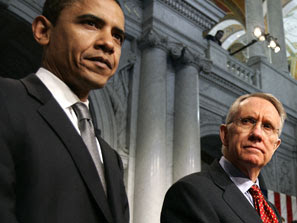 Democratic Majority Leader, Senator Harry Reid has been apologizing profoundly, the last few days. A comment made by Reid in 2008 during the Presidential Campaign, in regards to President Obama has recently surfaced. In a book by Time Magazine's own, John Heilemann and Mark Halperin, entitled "Game Change", Reid commented on Obama's chances at the Presidency.

Senator Harry Reid was quoted as saying, Barack Obama's electoral chances improved due to his "light skin" and his speech that had "No Negro Dialect", unless he wanted to have it. Reid says his comments were meant as Praise and has also stated he was "wowed" by Obama's oratorical gifts. Since the surface of these comments, Reid has thus apologized and released the following statement:

"I deeply regret using such a poor choice of words. I sincerely apologize for offending any and all Americans, especially African-Americans.

President Obama, quickly accepted Reid's apology and says he "considered the book closed". Rev. Al Sharpton has also come to the support of Reid, although Reid

did not select the best word choice in this instance, these comments should not distract America from its continued focus on securing health care or creating jobs for its people."

Critics of this circumstance believe Reid quickly apologized, only due to his heavy race for Senator re-elect. Other critics simply agree with Reid, and believe he spoke only the truth, and that President Obama's light skin and oratory skills did render him a "Racial Pass". To these critics President Obama does represent the opposite of all the negative notations placed on stereotypical African-Americans (i.e. dark skin equals aggressive, distrustful and broken speech), and therefore did provide him with the advantage needed to run a successful campaign.

What do you think? Did Obama win his Presidential election with the help of a "Racial pass" or was his character and campaign run in itself, enough to put him where he is today, IN THE WHITE HOUSE?
Posted by TalkstillCheap.com at 7:00 AM