TURN it UP TUESDAYS: F* You, Signed Sincerely 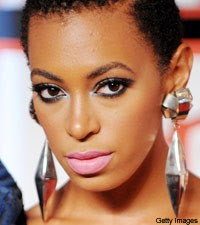 I am very excited about this week's song. I absolutely LOVE it. This is supposedly an old track. Ive never heard it until recently. The song is titled, F*ck the Industry, Signed Sincerely. The song is by Solange and features Wale. The song is supposed to be a part of a Solange mixtape release entitled, "I Can't Get Clearance".

In the song Solange addresses the music industry and its portrayal of the perfect artist. Basically, Solange is just defining herself and her music. She clarifies her musical attitude and her approach as an artists who does not want to be compared to anyone else in the game, even her sister.

Some say, of course as they did Ashlee Simpson and Janet Jackson, that she is trying too hard to be different and set herself apart from her sibling. As you may know, she recently cut off all her hair, however that is something she has done once before in her lifetime without thought of recognition for it. One would think, if you have a sibling in the industry, that is GREAT, you would have to work a little harder to differentiate yourself. Any who, listen to the track, it samples some Kanye and DEFINITELY HAS ATTITUDE!

Press play on the below player. Share what you think! If you like this track, I definitely recommend checking out her latest album.

Posted by TalkstillCheap.com at 12:00 AM