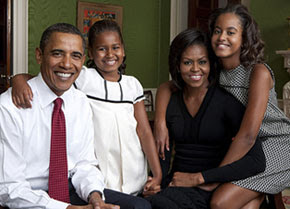 The reality is.....
Our President & his family are black.
How does this picture make you feel?
As a Political Science Major, this picture makes me feel like I can conquer the world.  This picture is living proof that anything is possible, if you believe.  If at first you don't succeed, try, try, try again.

If you haven't read President Obama's book "The Audacity of Hope" (penned before he became an official Presidental candidate), then you may not be exactly familiar with his story.  President Obama ran for Congress once before he finally became a member.  Upon loosing the first time, he almost made the decision to give up on the political position.  He faced many adversaries being young and African American.  Even the first Lady, Michelle Obama, thought it fitting at one point for Obama not to run for office again.  Fortunately, Obama decided to give the Congressional run, one last chance, & he won.  Now he is your American President.
Where would he be, where would you be, where would our country be RIGHT NOW, If he would have given up?
Reality is....... He didn't and neither should you EVER!
Enjoy positive news, updates, and aspiring conversation?  Post your comment, get the conversation started and become a follower of my site for updates.
Follow me on twitter.com/RelleisALLthaT
*I appreciate the current followers of this blog, and everyone who is in support of the environment I am trying to create.  It is you, that inspires me to continue and do better.  You will see several changes on this site, and a lot of growth.  I encourage you not to get left behind*
Posted by TalkstillCheap.com at 5:17 PM